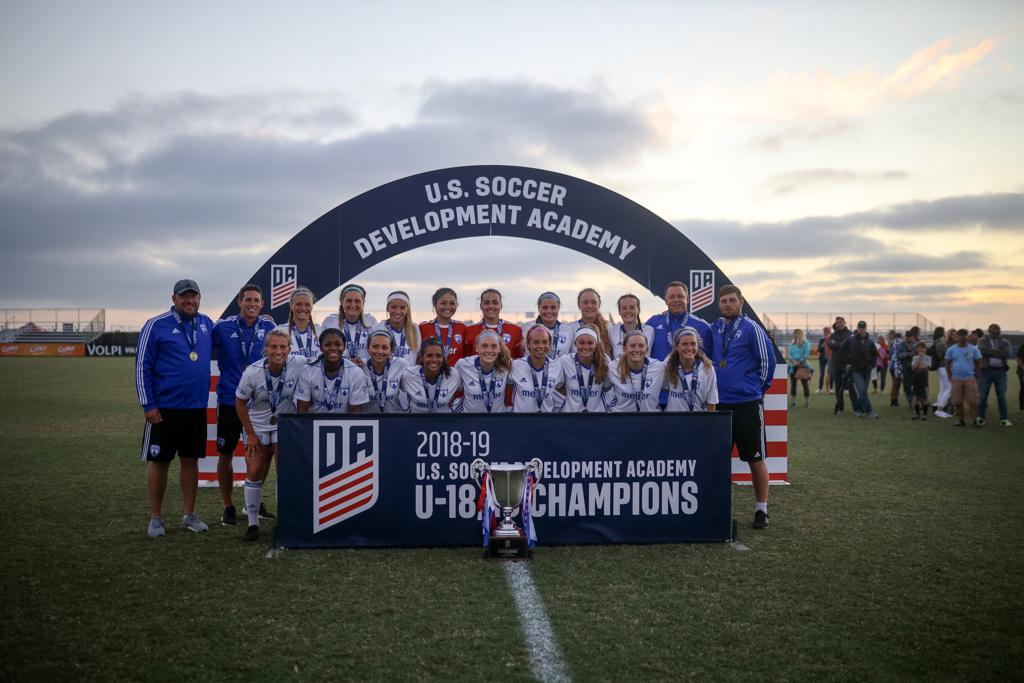 The Development Academy Program features combined age groups where identified players can "play up" within the club structure, as encouraged by U.S. Soccer Technical Staff.

Development Academy clubs are required to train a minimum of four (4) days per week and rest one (1) day per week during the Academy season.

Each Academy team plays approximately 25-30 league games, including 6-9 games played at Showcases. Teams that advance from the Academy Playoffs could expect to play up to three (3) additional games.

Our game-to-training ratio ensures our players are getting adequate rest. Teams may have one (1) or two (2) games per weekend based on travel, with no more than one game per day.

To maintain a focus on club training environments, Academy players and teams do not play in any outside competitions without written permission from the U.S. Soccer Development Academy staff. This includes any other leagues, tournaments, State Cup competitions, ODP or All-Star events. Development Academy players for all teams must choose to participate in the Academy full-time and forgo playing for their high school teams.

Full-time Academy players can only participate on their designated Academy team, with only two exceptions: U.S. Soccer Training Centers and Youth

The Development Academy upholds this rule because we believe elite players require world class environments. The Development Academy's 10-month Program allows for a greater opportunity to institute style of play and implement a system according to U.S. Soccer's Development Philosophy. It also gives teams increased opportunities for younger kids in their club to "play up" against older players in both training and matches, thereby accelerating their development.

The new U.S. Soccer Development Academy logo has been released to kick off the 2016-17 Academy season, the program's 10th season. The logo features an inextricable link to the U.S. Soccer crest, as well as features the letters "DA" for Development Academy. The forward and upward motion of the logo's shape signifies the strategic growth and direction of the program. Additionally, the four stripes represent the four pillars of the Development Academy: excellence, pride, tradition, and education. To stay in tune with this season's action, follow the Academy on Facebook, as well as Twitter and Instagram @ussoccer_acad with the hashtag #DA10.

What is the Development Academy Program?

Following a comprehensive review of elite player development in the United States and around the world, U.S. Soccer created the Development Academy in 2007. The Academy Program's philosophy is based on increased training, less total games, and more meaningful games using international rules of competition.

The Academy Program focuses on positively impacting everyday club environments to assist in maximizing youth player development across the country. The Academy values individual development of elite players over winning trophies and titles. The Academy sets the standard for elite environments for youth soccer clubs nationwide and is a part of U.S. Soccer's global leadership position in youth soccer that will impact thousands of players.